I just learned today that Button Hill has been nominated for the 2015 Kirkus Prize – in the Young Readers Literature category. 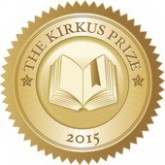 ABOUT THE KIRKUS PRIZE
“The Kirkus Prize is one of the richest literary awards in the world, with a prize of $50,000 bestowed annually to authors of fiction, nonfiction and young readers’ literature. It was created to celebrate the 81 years of discerning, thoughtful criticism Kirkus Reviews has contributed to both the publishing industry and readers at large.

“Books that earned the Kirkus Star with publication dates between November 1, 2014 and October 31, 2015 (see FAQ for exceptions), are automatically nominated for the 2015 Kirkus Prize, and the winners will be selected on October 15, 2015 by an esteemed panel composed of nationally respected writers and highly regarded booksellers, librarians and Kirkus critics.”

Winners will be announced in October 2015 – fingers crossed!