A moment’s messing with an odd clock plunges a lad into the strange and dangerous borderland between the living world and the realms of the dead in this decidedly offbeat chiller.

Great-aunt Primrose’s old house has no TV or Internet…but it does have a bone Nightclock hidden in the root cellar. Hardly has Dekker given its skull-shaped face a twist than he’s engaged in a desperate game with a malign doppelgänger—who plucks Dekker’s heart out and escapes into the shadowy Nightside.

Fortunately, even though Dekker begins to decompose (his annoying little sister, Riley, rightly dubs him “zombie boy”), Aunt Prim grows special tomatoes that work as temporary heart replacements. Unfortunately, for all her joking, Riley intrepidly sneaks off alone into the borderland to get his stolen life back. Impelled to follow, he plunges into a huge impending crisis: The mighty Nightclock at the final gateway to the realms of the dead has been forcibly stopped so that no spirits can get through at all.

Though strewn with scary creatures and tons of spooky bones, the tale is also leavened with such tongue-in-cheek elements as a bustling “Bizarre” of the dead and borderland trains lit by lanterns hung in the rib cages of skeletal conductors. Both Dekker and Riley are admirably clever, and Bradford keeps the stakes satisfyingly high. 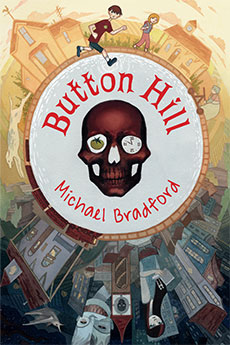 Awarded to Books of Exceptional Merit