Here’s another review for Button Hill that appeared today in CM Magazine.  I love reading the Canadian Review of Materials because it is a true labour of love: an all-volunteer crew of librarians, teachers, and professors review of what’s new in Canadian writing and illustration for youth. And they publish every week!

So far reviews seem to be positive!  It’s fascinating to me to see the different aspects of the story that different readers have responded to. Some of the comments about things that didn’t work for the readers have been helpful feedback as I work on the sequel. 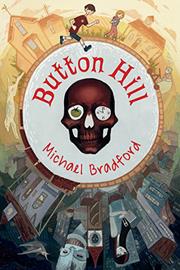 Dekker took a breath and lowered his voice. “What is this place really?”

“You do deserve some sort of answer, I suppose. Think of it this way: just as a button holds two parts of a shirt together, Button Hill is one of the places that holds the world of the living firmly in place against the world of the dead. The borderland is thin here, so thin that some places appear in both Dayside and Nightside.”

“Like your house and the train station,” Dekker said.

“Indeed, my duty is to keep those two sides in balance and manage the passage of the dead from one side to the other.”

“Then why couldn’t you help me before?”

“The Nightclock is one of the powers that be, an old power. It cannot be bargained with. Once it had marked you and Cobb, I could no longer interfere until your agreement had run its course. When you foolishly wound the skull, the old well passage between the sides must have opened briefly, long enough for Cobb to slip through and take your sister. Watery places are the most commutable, like the pond in the garden. Regardless, if it weren’t for Captain Tom, I don’t think you’d be in as fine shape as you are.”
Dekker is staying with his eccentric, stern Aunt Primrose while his mother completes her degree. Unlike his eager little sister, Riley, Dekker is resentful and bored. Exploring the basement, he finds an old clock shaped like a coffin, with a skull for a face that readers later learn is a Nightclock, marking the passage between the living and the dead. Despite warnings not to touch it, Dekker’s curiosity gets the better of him, and, as a result, the clock is reawakened, unleashing a series of dramatic and terrifying events. For when the clock works people from Dayside disappear.

When Riley vanishes down the chute of an old well, Dekker uses the same route to trace her. He finds her with a mysterious, unpleasant young stranger who is identical to Dekker. This boy, Cobb, tells them they are now in Nightside. He challenges Dekker to a game which will decide whether Dekker and Riley will return to Dayside. As they swear on the Nightclock to abide by the rules, the clock marks both boys for death, but, as each has only half a mark, each has a chance for survival. When Cobb steals his heart in a particularly frightening scene, Dekker and his sister are forced to overcome many obstacles to retrieve it and then return to normal life on the Dayside.

The reader is hooked into this story immediately through the atmospheric foreshadowing of things to come, the tangible depiction of place and the use of clear, concise language liberally sprinkled with picturesque phrases that show rather than tell. Each and every character, even those in minor supporting roles, are so well delineated they are totally authentic. The relationship between Dekker and his sister that begins as one of teasing rivalry and turns into a deep, loving one, where each is willing to sacrifice themselves for the other, is particularly touching as is the strength and wisdom of the quirky Aunt Primrose.

This imaginative work is Michael Bradford’s first book for children. The progressive plot, which leads to an eager reading to ascertain the safe outcome for our heroes, makes readers overlook the excess of twists and turns and the fast pace of the action that can be confusing. There are also some episodes that are a little frightening although they may be considered the norm for children brought up on Harry Potter and Lemony Snicket! Overall, however, Button Hill is a great addition for any library or personal bookshelf and will certainly be enjoyed by skilled readers aged ten and up.

Aileen Wortley is a retired librarian living in Toronto, ON.